Ever wondered what it looks like inside the International Space Station? Well, space lovers, wonder no more. Now you can tour the ISS right from your couch, in all its gravity-defying glory.

Seriously, though. This tour is out of this world (pun intended). The ESA put together a 360 degree panorama for your viewing pleasure, all strung together by astronaut Samatha Cristoforetti’s series of photos she snapped before she came back down to Earth in June.

As you guide yourself yourself through the ISS, you’ll go through Node 1, 2 and 3, as well as the Japanese, Eurpoean and United States labs: Kibo, Columbus and Destiny.

You’ll definitely be overwhelmed when you first step onboard. There’s wires all over the place, tons of controls and who knows what, but there are written and video descriptions of items, recorded by Samantha, so you can distinguish the console for controlling the robotic arm outside the space station from the ISS’s oven. And speaking of the ISS oven, while you’re there, be sure to check out the video of how astronauts “cook” their food. You’ll either be intrigued by the package of floating thermostabilized food, or find yourself crazing quinoa salad. I’m feeling both ways. 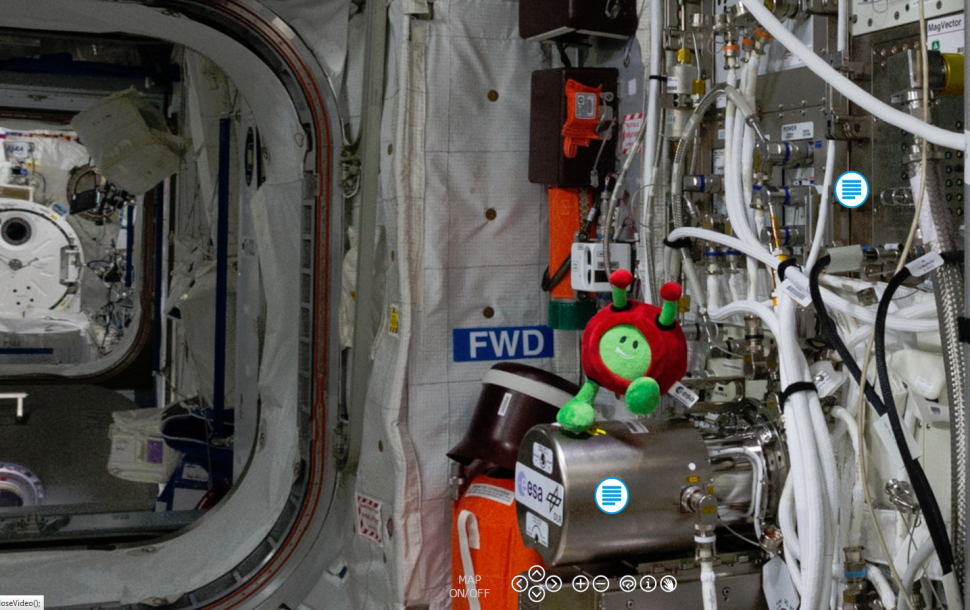 My favorite finding onboard? This little guy named Paxi, the ESA alien mascot.

You’ll also up your space cred after taking this tour. Did you know there’s a muscle training machine onboard designed for weightlessness? Do you know where all space station astronauts leave their expedition patches on the ISS? (Node 1.) Besides an awesome tour, you’ll learn a ton of funfacts that you can quiz other fellow space nerds on.

So, welcome aboard to the ISS. Click here to start your tour. Make yourself at home (you’ll be here for a while), but be warned: You may get dizzy.